Nowhere in Africa (Nirgendwo in Afrika)

A tale, which follows a young Jewish family from Germany to Kenya as they flee the Nazi regime at the onset of World War II. Jettel Redlich, of upper-class upbringing, and her daughter Regina, moves to Kenya to be with her husband Walter. Walter works as a farm manager, while Regina and Jettel are adjusting to their new home. Then Britain declares war on Germany, and the family is again separated. Through Jettel's affair with a British solider, her family is given preferential treatment. Regina is able to attend school and Walter is given a good job. But after the war, the family is too fractured to reunite and Walter contemplates a return to Germany, while Regina and Jettel have never felt more at home. 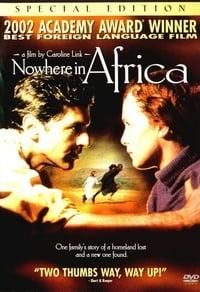 Nowhere in Africa (Nirgendwo in Afrika)

Sorry, Nowhere in Africa (Nirgendwo in Afrika) is not available to watch at home in United Kingdom at the moment